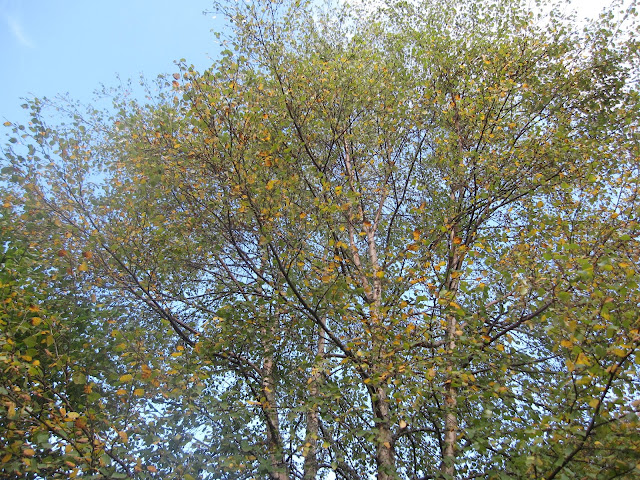 My mum, a nonagenarian, has lived all her life in the Isle of Axholme which is a rural area in the north-western corner of Lincolnshire - so called because the rivers Ouse, Don, Trent and Idle formed its natural boundaries. Mum was born in Haxey and moved to the gatehouse on Jeffrey Lane, Belton when she was nine. I love to hear her recall her childhood days and she likes to remember. Because of the distance and, more recently, because of the pandemic, most of the recollections are communicated by letter or by telephone. Mum has a dim view of technology but she is thankful for the telephone!

The October holidays were, in her day, meant for the harvesting of potatoes! It was the "tay-tee" harvest. Here, in Scotland, it is the "tatty" harvest. Mum tells me that, as children, they were expected to help with the potato harvest so that the family would have sufficient money for new winter coats for the children. Children grow fast and sometimes it was possible to hand down clothes through the family but, even then, there was going to be a need for at least one child to have a new coat.
Mum recalls sweltering in Indian summers, and coats being rolled up and left at the end of the potato rows.
One thing she really didn't like was how frogs would jump up and out from nowhere and startle her. That is firmly etched in her memory so that, whenever she reminisces about the October holidays, she always mentions the frogs!
Potato harvesting stills happens - but how it has changed! Not in gardens and allotments - but in the fields. The modern potato harvester digs out the potatoes with the vine, then sieves them and, finally, separates the potatoes from the soil. Simples! 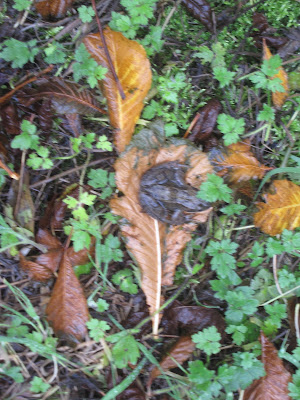 Can you spot the frog?
Few children help with the potato harvest in the October holidays now. Agricultural methods may be different and children may not need to earn their winter coats anymore but October still reigns in splendour through the darkening days of the year. There is so much out there at present for children and their families to enjoy. A walk in October is an absolute delight. Even on misty days - when the damp penetrates - the smells, sights and sounds may be different but they are priceless nonetheless. You don't forget that walk in October. Throughout the winter it comes back to you as the culmination of Summer's high spirits. 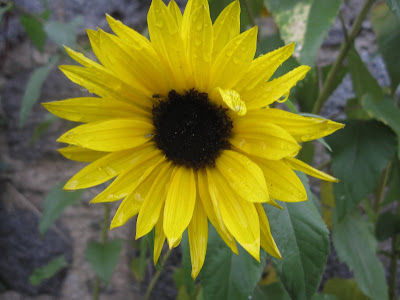 October's Sunflower
At the beginning of the month we were visited by a goldcrest. I thought there was a rosy cast to it but the overall russeting of the season was probably the cause of the unusual shade for a goldcrest. The cute little creature was flitting in and out of the trees and shrubs behind the house and I did have a wonderfully close view of it as I sat by the window speaking on the phone. That part of the garden has been frantic with bird activity recently. The blackbirds and thrushes have, rather noisily, been laying claim to any berries that may be left. Wrens, finches, tits of all kinds, sparrows and jackdaws announce their presence and disappear into the long grass.
The morning sunlight has made its way into the back of the house, making flickering patterns as it dances with shadows up and along the walls. The beauty of it takes my breath away and I read the signs - the sun will stay with us through the darker months ahead - it simply changes position. At present it is set on a course from rising almost north-east in summer to rising almost south-east in winter. It's still here! As the days grow short and the nights grow long, it's easy to think that it has left us - but it hasn't.
We are still emptying our old home and every week we bring more bags and boxes over to Stempster. We have an offer for the lovely old town house and I have to admit that, although Stempster is the home of my dreams - all our family's dreams - I feel a little sad that soon we will close the door for the last time. I haven't been able to keep on top of the garden there recently but I am so pleased that, although the grasses are quite high and there are more weeds than usual, it all looks very lush and healthy. One of the saddest things in the garden is that there are empty feeders and coconut shells hanging in the elm by the kitchen window. Keith is a diligent feeder of birds but hasn't been able to keep them fed at both properties. Soon a new family will take on that mantle. I sincerely hope they enjoy their bird visitors as much as we have. 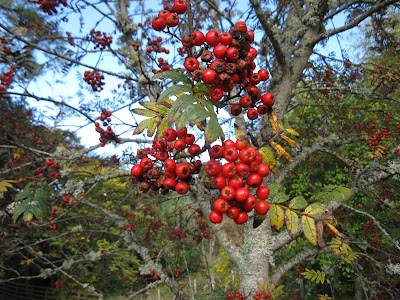 Rowan berries
At Stempster we continue to make friends with our wildlife - usually from a distance - most of them are not fully trusting of us just yet - but we're working on it!
To our growing list of residents and visitors we can now add moles. Now I know what you're thinking! "You won't be pleased when they start to spoil your flower beds!" No I won't but I'll still love them. I have in mind Mole from "Wind In The Willows" by Kenneth Grahame. Mole loved his home. He was good natured and lovable - but with an intellect completely hidden until it was required that he demonstrate it for the benefit of his friends. Aren't all moles like that!!!
When we lived at "Branscombe Lodge" in Belton, Dad asked Mr. (Bill) Penrose to garden for us. He was such a pleasant man BUT he killed moles! For that I was unable to forgive him!
Nearby our newly discovered mole hills we have a horse chestnut tree. This is the first time in my life that I've had a horse chestnut in my garden - and I'm very pleased with it. We are collecting the conkers with a view to sharing them out between the rooms of the house. Someone said that they deter spiders from coming into a room. Worth a try! We had a huge raft spider in the house recently. I was disappointed because, when we were living in Orkney, we never had large spiders and I was told (I'm SO gullible) that the further north you lived the less likely you are to see big spiders. Poppycock! 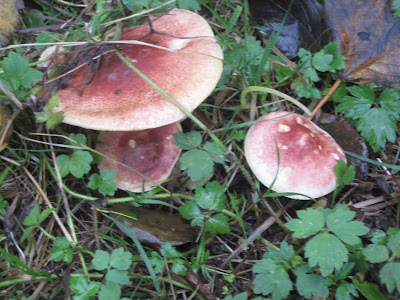 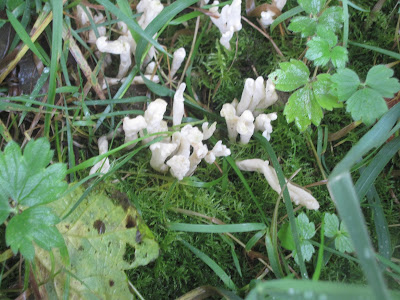 Fungi at Stempster
Since my September blog, we've had more deer in the garden and along the boundary wall. They are all around the fields and woodland near the house and Orlando is now getting used to their smell. He gets more excited when he smells the family of pheasants living on the corner. They're not really worried about us but, as soon as Orlando starts snuffling in the undergrowth, they're off - often making me jump!
The trail cameras have given us some marvellous shots of the garden birds we have here. The blackbird and robin seem to actually pose for the camera. This can't be right but it does seem that way. A woodmouse came to investigate too - such a sweet little chap with its big ears and dark eyes.
And - drum roll please - the pine marten came again! This time we had a different view of him/her. It came up to the camera but was then startled by what appeared to be a light flashing. We've altered the setting so hopefully this won't happen again.
The goldfinches are coming closer to the house and sharing the seeds hanging from the spindle tree. In fact the seeds have started to go down quite quickly now. There are still plenty of berries for the berry-eating birds but the Swedish Whitebeam is being denuded at quite a pace. Not many berries left at all there.
There have been a few clear nights when we've been able to get a good look at the stars and planets. We are benefitting from the lack of light-pollution here and had a clear view of Jupiter on 15th. Today, from our self-catering cottage near Bridge of Cally in Perthshire, we had a clear moonlit view of the tree-covered hillside in the early hours of the morning. After a good deal of mist and rain, when it was difficult to see very far, it was a genuine treat to be able to look out onto such beauty. 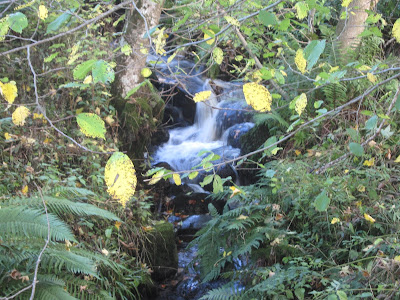 Stream with waterfall, Cally Cottages, Perthshire
We've been doing the easier walks around Kirkmichael this week and enjoying the colour palette, the rustling of leaves, the rushing of the River Ardle and the multitudinous and fascinating fungi. The cattle have developed their winter coats and wait for the colder weather to match them. It certainly isn't cold just now but this morning's walk was definitely a little bit cooler than yesterday's. 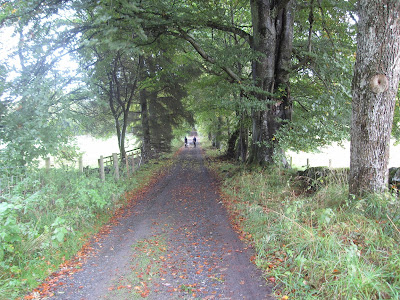 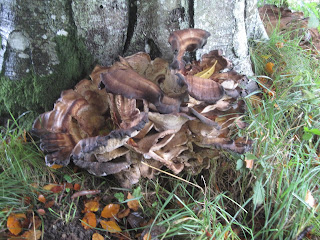 Fungi, Kirkmichael
We will soon be heading back up north to Caithness where there is still much to do in order to be ready for the winter months. Maybe we'll have one of those sweltering Indian summers before the wintry weather sets in? At least we won't have to sit in the mud of a potato field and pick potatoes by hand while running the gauntlet of athletic frogs! We have plenty of those at Stempster! 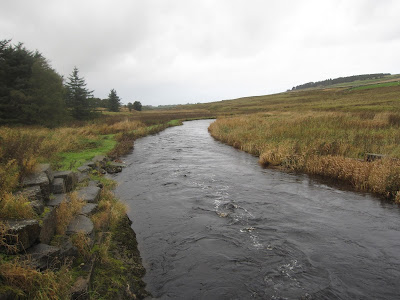 Our River Forss as it runs towards the Atlantic
And here we are - back home! The trail cameras have yielded more secrets! We have a fox - or we may have two! (We didn't see the first fox leave before another fox went through the same gap. Of course, the first fox may have left by another route.) Could they be the residents of the hole in the boundary wall? This is so exciting! Think "fox cubs"!!
On 15th of this month - the day when Jupiter was so clearly visible - our second grandchild came into this muddled world. I know that she will be shown all of the good things in life - the things which cannot be bought - and she will have the opportunity thereby to override the anger, the bitterness and the negativity she may witness around her - if this reeling world doesn't find its feet . With her two year old cousin, Auri, I see a force for good. They're coming World! Don't panic!
Welcome Ailsa Soline Ivy Bonnet-Crow!
Labels: Autumn Caithness deer fox fungi Isle of Axholme Lincolnshire mice nature diary Perthshire pine marten potato harvest trees walking wildlife 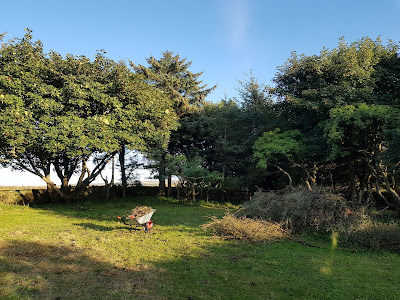