MAY - "The flowers appear on the earth; the time of the singing is come and the voice of the turtledove is heard in our land" Song of Solomon 2:12 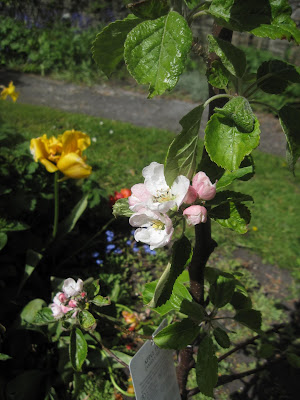 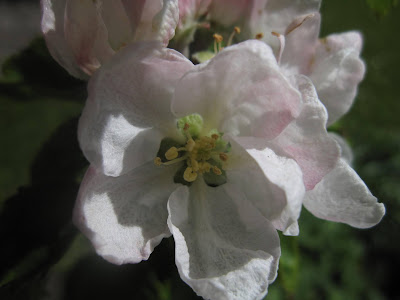 While the name-calling and anger goes on, there is something of great importance happening which can easily be overlooked when we find ourselves victims of human error.

I'm not quite sure where it all went wrong but power and greed are capable of ruining lives by obscuring the wholesome springing of the year. Let's get out there - in spite of the powerful and greedy. 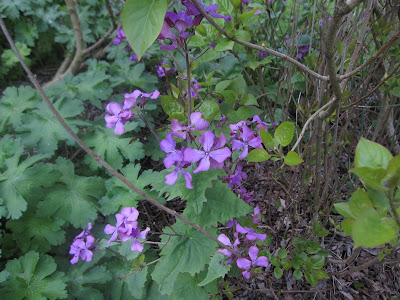 Honesty is the best policy
May May be open to all of us! I find it genuinely tragic that there are those people who cannot hear the music of the wakening world around them - for whatever reason.
I live in a small town in the far north of Scotland. I'm really a country person but here I am! We've lived here since December 2009 and, during that time, I have celebrated each season as it has arrived. At present I'm waiting for the lilac to flower and fragrance the garden while, at the same time, I'm loving that we put back the bluebells where they belong. They commit the border to an exciting summer.
When we arrived here the garden had been sanitised - grass and borders of small stones wherein tree stumps and two mature maples sat awkwardly beside a variegated holly.
I set to work. 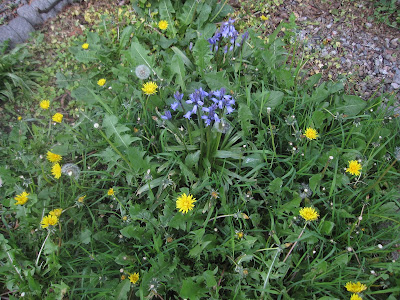 In the wildER patch!
My children did much of the heavy work. I didn't make them - it wasn't child-labour - and the youngest was sixteen when we moved here. They gathered up many stones and peeled back the tarpaulins which were underneath. They dug over the compressed soil and hey presto! Bluebells, mimulus, wood sorrel and other old friends just kept arriving. It was a reunion!
Now the border is electrified by the many bluebells which slept beneath the tarpaulin for several years. I have to admit that I had a hunch this may happen once the suffocating blanket had been removed because I'd looked at old maps and noticed that the garden was once marked as woodland. 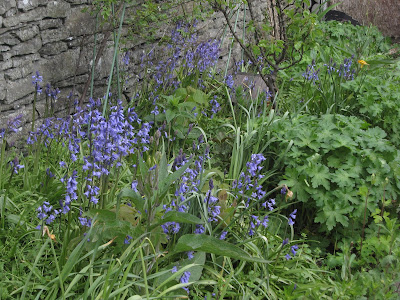 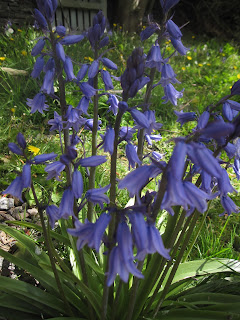 Close up
And the birds have come back too! Before our son left for foreign shores, he had created a feeding station and a daily routine for giving our little feathered friends what they needed. Others were encouraged by the regularity with which food appeared. Now we have an orchestra and chorus. There can be few experiences more meaningful than taking oneself off into the garden early on a May morning and absorbing it all. The promise of new life couldn't be clearer if it jumped up and thwacked me! 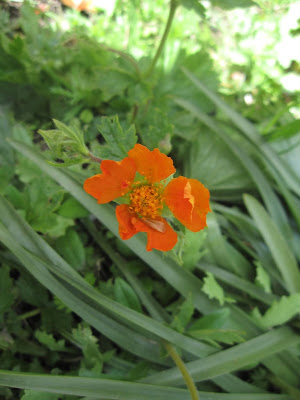 Is there anything more orange than a geum?
Our garden isn't huge by any means but it's big enough to create a haven. Even if we had no garden, I would still have to grow things. I'd have pots inside and out and I'd really have to improve my skills with houseplants. I would have a nesting box close by and I'd fix a small bird-feeder to the window - or even just scatter a few seeds along the outside sill. 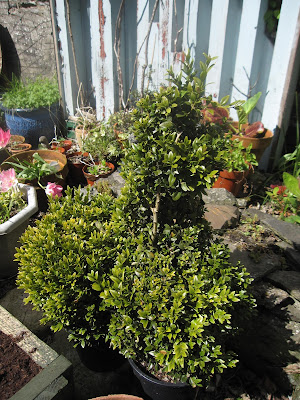 Someone needs a haircut!
In our town we are lucky to have ivy-leaved-toadflax popping up everywhere. It really is the dearest little plant and I get a buzz every time I notice it. Having been here for hundreds of years, it's now considered naturalised but it originates from the Mediterranean. The leaves can be eaten but please don't take its root - I can't get enough of it!
Groundsel grows along the road's edges. Daisies wink from cracks in the paths. It's all there - just waiting to be loved - while I watch the swallows and martins swirl in and out of the trees and through  our square. Later, the goldfinches will feast on the fluffy groundsel seeds. 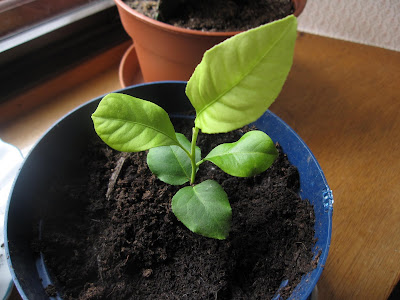 Lemon tree from last year's pip. Thank you Dorrie!
We started off the month in Orkney. We lived there in the eighties and nineties and our two youngest were born there. We had a good crossing on the Friday evening (30th April) and spotted gannets, puffins, fulmars and a skua from the boat. The next morning, we woke up to a tribe of hares chasing each other over fields, through wire fences, across the quiet road and then flattening themselves against the grass under the wall of the cottage we were staying in. That day, the magical First of May, we saw dozens of hares as we revisited old haunts.
Primroses and daffodils lined the road edges and the kingcups were flowering at Breckan. We saw seals in Loch Stenness and the oyster catchers chelped rudely at us if they thought we were too close. Lapwings and curlews circled above the fields calling up the spirits of May and the kye, only recently having left their byres, were still wearing their winter grub! 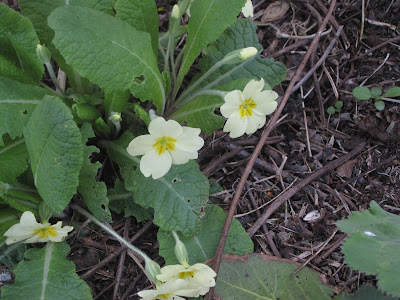 Shy primrose in the hedgerow
I spotted my first definite swallow of the year on 2nd May in Orkney and saw two ravens close by Summerdale - scene of the last battle on Orcadian soil which took place between Orkney/Shetland Sinclairs and Caithness Sinclairs on 19th May, 1529.
We arrived home in Caithness on Monday evening and found that our kingcups, planted in the garden pond last year, had opened up. 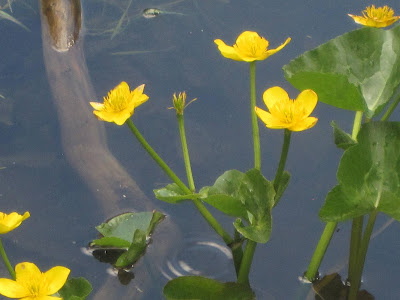 Kingcups in the pond
I'm regularly flooding the area around the pond to maintain a damp area there. I planted iris in and around the pond last year and they all seem to be doing well. I can't tell you how much I love my little pond. It has added so much to the garden and I sometimes laugh out loud when I see the birds sitting on the branch which I put across it. They don't just drink from the branch - they also take a shower from there! 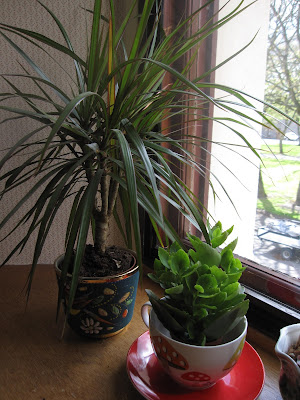 I think I may be getting better at the houseplant thing?
One week ago today, we met up with our daughter and her family in Golspie. The first meeting since last year!  We walked in the woods by the Big Burn and then ate fish and chips in the little park by the shore. We had a magical day but, even though there was magic in the air - due in no small part to our incredible little granddaughter - it was very much real-life. The softness underfoot amongst the trees, the sung matins of the woodland birds and the smell of freshly cut grass as people set to work on their lawns, were all very real - and free! It's there for all of us - just love it back! 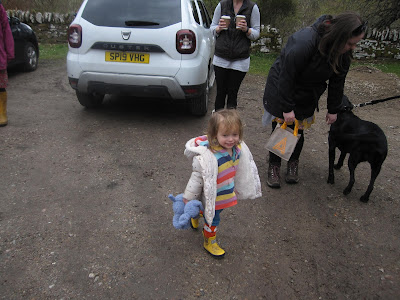 A little person with a big smile - and a blue elephant! 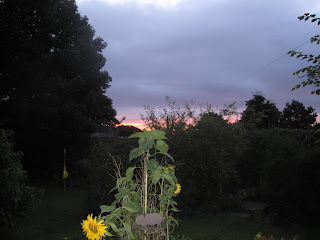 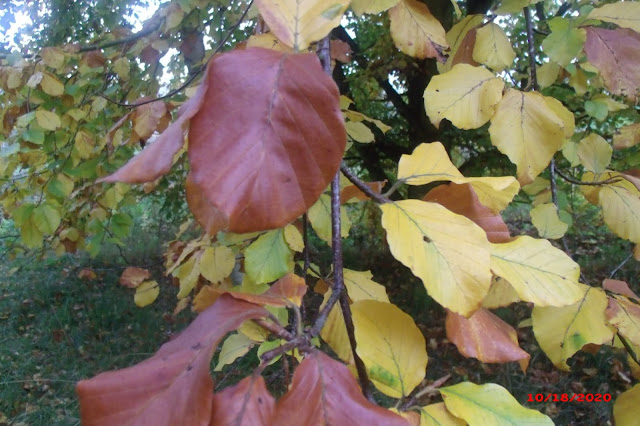